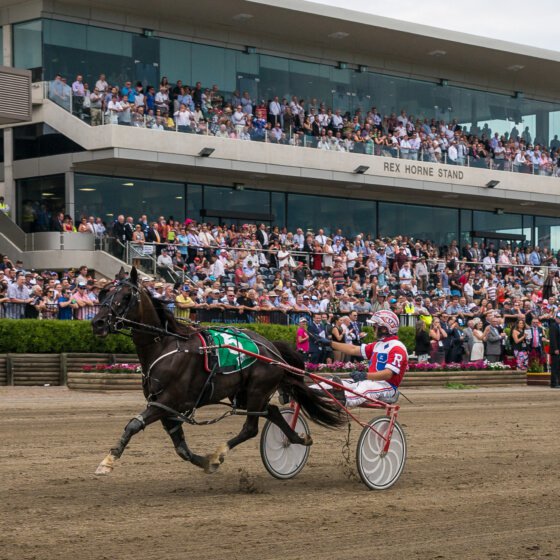 The man behind the creation of the Miracle Mile

Leonard Herbert Smith was born at Paddington (inner Sydney) on 25 March, 1917. A gifted scholar, Smith in his younger days was a very talented and gifted sportsman.

He played Rugby Union for Eastern Suburbs from 1937 to 1939. The solid inside centre, after making state representative appearances for New South Wales against Queensland, Victoria and the All Blacks, was selected as a Wallaby for the ill-fated 1939 Tour of Great Britain. Docking at Southampton the day before World War II was declared, the Wallabies team left England without playing a game.

Len Smith then enlisted in the AIF during World War II and served in Palestine, Egypt, Syria and New Guinea before returning home in 1942. Playing Rugby League in the army, Smith realised that many rugby union players in Sydney had converted and on his return he switched codes to be able to compete against the best players.

Smith joined the Newtown Bluebags in 1942 and played 74 games as a centre and five-eighth for the club until 1948, aside from the 1945 season when he was on active service.  Newtown won the First Grade Premiership in 1943. In his final years with the club, he co-coached the first grade team with Frank Farrell.

In 2008, the Centenary year of Rugby League in Australia, Len Smith was named in the Newtown Jets 18-man ‘Team of the Century’, along with greats like Dick Poole, Frank Farrell, Phil Sigsworth, Warren Ryan and Brian Moore.

In 1947 Len Smith was selected as captain for the Sydney and NSW Rugby League sides and captained in eight matches. He was awarded NSW Player of the Year for two successive seasons.

In 1948 he was appointed captain-coach of the Australian Kangaroos (Player number 247 on the Australian Players Register as Kangaroos) for a two-test home series against New Zealand. It was a drawn series, 1-1, New Zealand won the first 21-19 and Australia the second Test, 13-4.

At the end of 1948, Smith was controversially left out of the squad of 28 players for the 1948 Tour of England team;  ‘winning Test captain one day then not being picked the next’.

He was never to play football again.

Len Smith began his working life as a cadet sporting journalist on the Sydney Daily Telegraph. When he finished playing football he moved to the old Sydney Sun where he covered Rugby League as well as a sport that was new to Sydney at the time – night trotting.

It was through his coverage of trotting that, following the running of Sydney’s first Inter Dominion carnival in 1952, he was offered a job in administration with the NSW Trotting Club.

Len Smith worked firstly as a Steward, which saw him re-write and update the rule books as well as publishing information for drivers and officials. He established a news and information bureau and the collection of statistics and records from this office.

He gave his highest priority to developing trotting in the country and provincial areas of New South Wales.

He felt that NSW needed to provide a larger horse population in order to create interest, and a market, for owners, trainers and drivers. He lectured to the local officials and officiated at the early race meetings, thus helping the new clubs to establish themselves.

He became Chairman of Stewards and Chief Handicapper in 1960 and Len and his staff conducted the biggest trotting carnival that Sydney has seen with the Final of the 1960 Inter Dominion with a 50,346 strong crowd.

In 1966 Len Smith was appointed the Club’s Chief Executive Officer, a position he held until his retirement in 1982, after 30 years as one of the industry’s finest administrators.

Len Smith and his staff were concentrating at this time on improving the programming of races at Harold Park and had been investigating the possibilities provided by the mobile barrier.

The first race with the mobile barrier was conducted as a ‘one-off’ race on 2 November, 1956 (won by the Merv Adams driven, Mineral Spring) but in 1961 Len saw the potential offered by the combination of harness racing under lights with the mobile, and the ideas were planned for the Miracle Mile, even at this early stage.

Following a study tour of the United States, Len perceived a need for a major race that would bring Australian horses to the attention of the market in America and it was in many respects the choice of the name ‘Miracle Mile’ that sold the idea to the sponsor.

‘Miracle Mile’ was a “catchy” name for the new race…the two-minute barrier had never been broken under race conditions in Australia at the time and mile racing was a whole new idea and seen as a ‘future’ for this country.

As Len Smith said at the time, “I picked 12 firms in Sydney that I intended approaching for sponsorship. It was an idea that had not been used very often in sport up to that time. It was to be the first sponsored harness race to be run in Sydney.”

“The first one that I approached was Amatil. They were delighted with both the concept and the name, and their association with the race was maintained for years, initially through the Craven Filter logo and then Coca-Cola. The ABC provided full coverage of the event and Robin Dundee obliged us by running the first sub two-minute mile in Australia.” Smith said.

TO BEAT THE TWO-MINUTE BARRIER

The introduction of the Miracle Mile saw great excitement in the public’s eye to see if the two-minute barrier could be broken.

Blue and red lights were placed at every quarter pole of the mile race and the lights would change if the leader was inside or outside the 30-second mark.

“It was excitement in the crowd when the leading horse was inside and the broadcaster revved up the fact that the field was on record pace”.

The air was electric in the big crowds and the huge media coverage all around the country leading up to the race was always about ‘can the horses break two-minutes’.

Up to the inaugural running of the Miracle Mile in 1967 sprint races over the mile, and indeed races from the mobile barrier, were few and far between.

The Miracle Mile was Len’s brainchild, a ‘baby’ he nurtured to become internationally famous and prove local harness horses were in world class. It saw Australian harness racing come of age and being recognised on the world stage.

Starting with an invitation field of six runners when raced at Harold Park to now eight invited runners on the spacious Menangle Park track, the race has had its controversy over the subsequent years with field selections.

But the ‘theatre’ has added to the race, generated wide-spread media and has seen the ‘Miracle Mile’, with its magnificent honour roll of all-time great winners, the leading race on the Australian and New Zealand harness racing calendar.

IN HIS HONOUR – THE ‘LEN SMITH MILE’

We honour Len Smith today with the running of the Group One ‘Len Smith Mile’, a race in its short history that has seen the champion Smokin Up (four times) and ‘Miracle Mile’ champion, Beautide victorious.

Len Smith’s great single achievement in creating and introducing the ‘Miracle Mile’, the great Australian race that has been run for over 50 years, will be long remembered in the history of this fine sport.